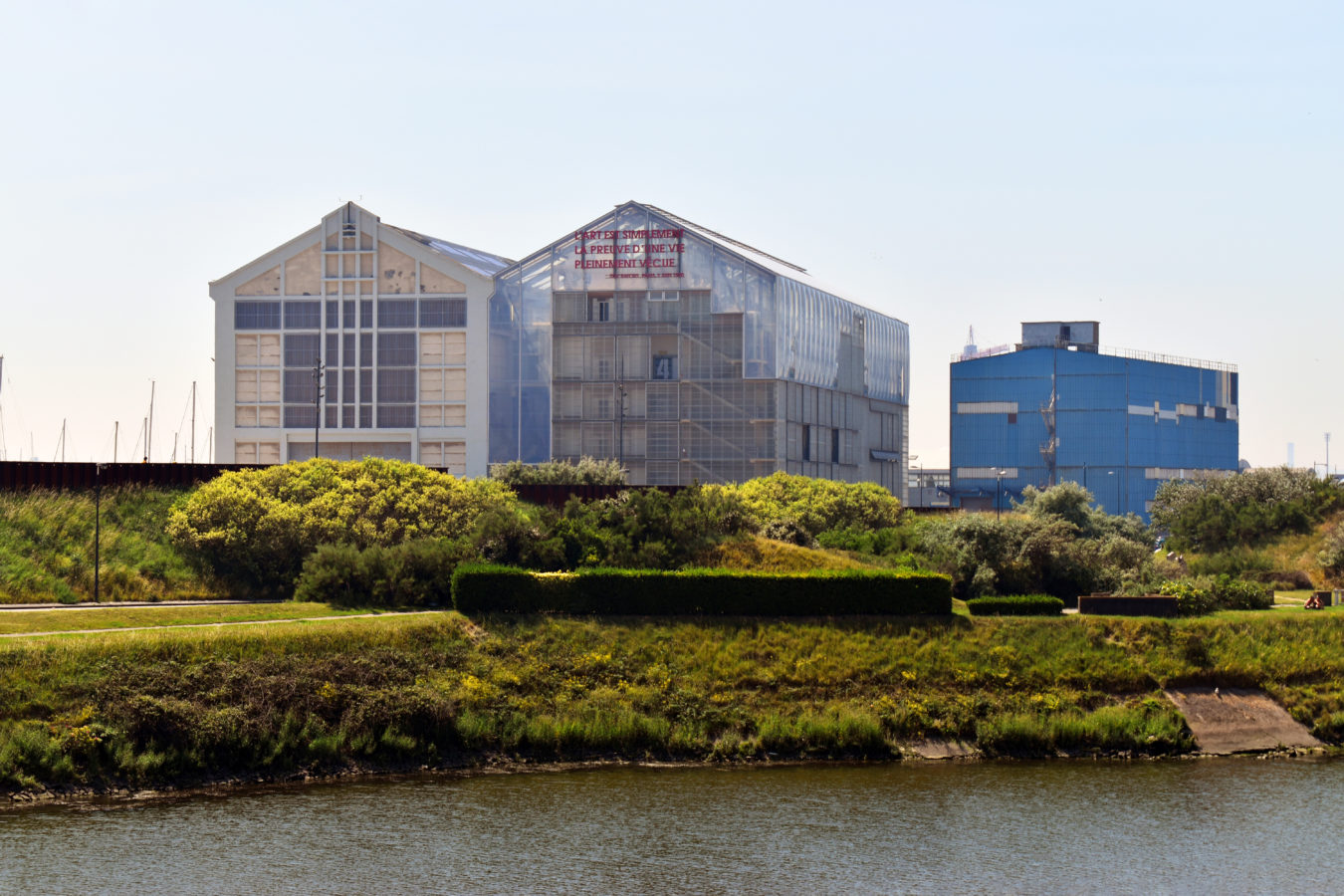 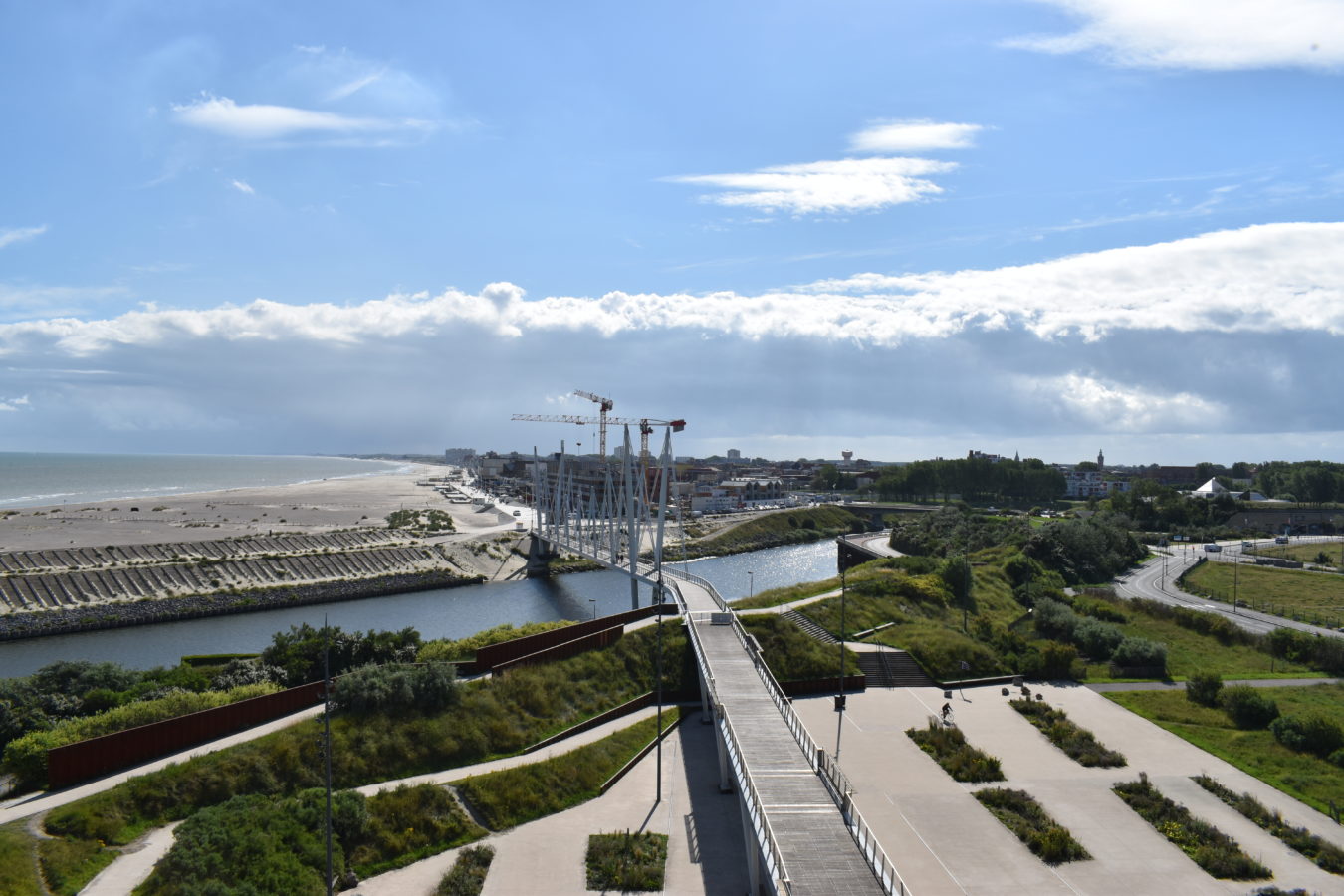 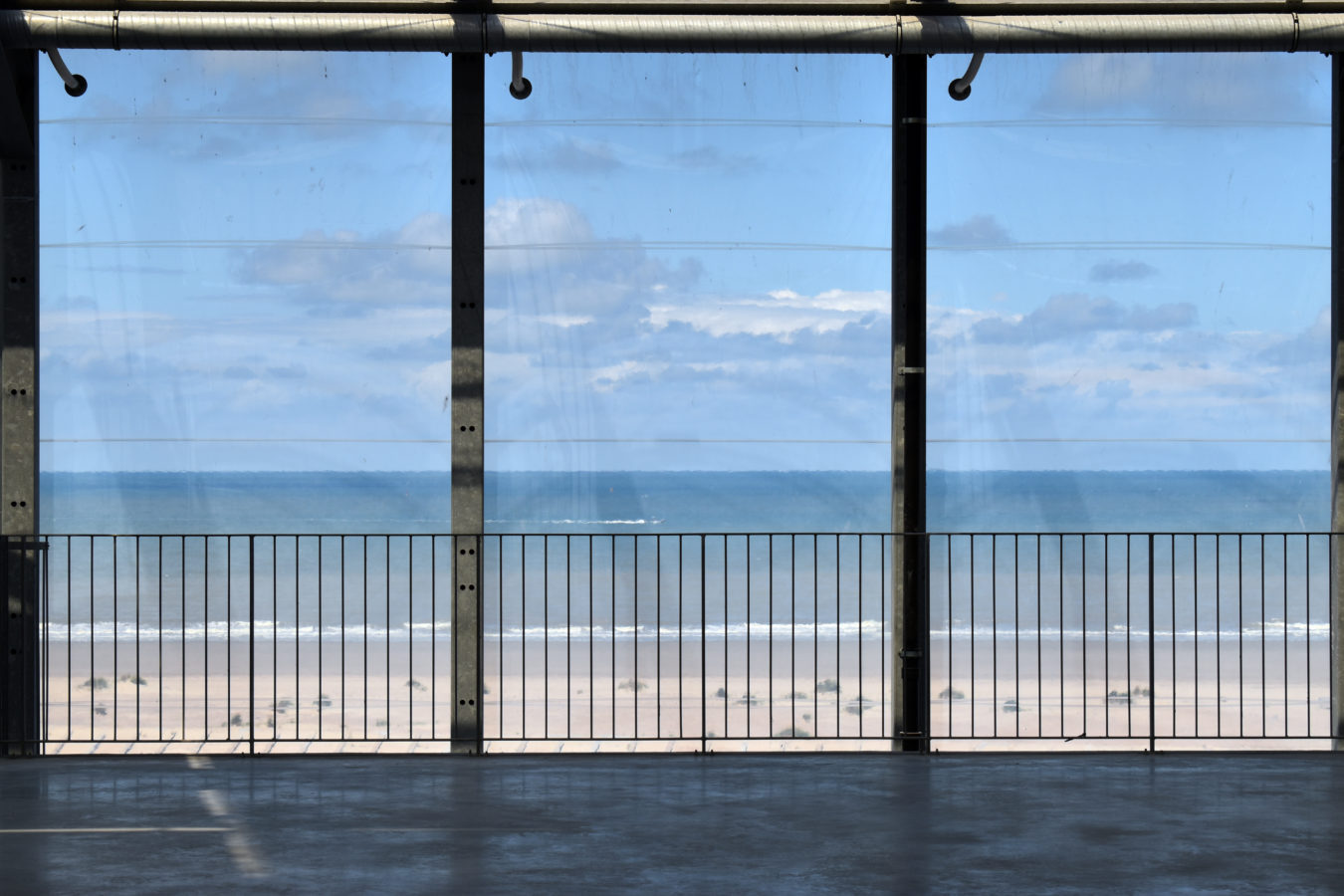 The Frac Grand Large building was designed by the Lacaton & Vassal architecture studio for the site of the former national shipyards. The architects opted for protecting one of the core elements of the area’s history and identity by leaving the Halle AP2 prefabrication workshop – built in 1947, nicknamed “The Cathedral” and cradle of the nation’s biggest ships – unmodified. Their solution was to build its exact double alongside it.

The two structures are joined in the middle by an interior street, a space providing direct access to the Frac and open to absolutely everybody. This street is an extension of the Grand Large footbridge

The two structures are joined in the middle by an interior street, a space providing direct access to the Frac and open to absolutely everybody. This street is an extension of the Grand Large footbridge designed by architect Brigit de Kosmi as a link between the Grand Large district and the Malo-les-Bains dike.

The Frac functions inside a single volume divided into six levels, protected by a diaphanous, insulating envelope that sets up an intermediate bioclimatic zone. The storage, exhibition, cultural liaison and office spaces are modular and as such perfectly adapted to the cross-disciplinary character of today’s art. This design concept means the exhibitions can be presented in fresh, innovative ways, while the building as a whole serves as fertile terrain for curatorial and scenographic experimentation.

The Lacaton & Vassal building is thus a full-time venue for bridges between memory, the history of the AP2 workshop and contemporary art installations.

Built in 1949, the AP2, the former “Atelier de Préfabrication n° 2” of the Dunkerque shipyards, is a real place of memory, a geographical reference that has marked the social and community history of the city and the region – and continues to do so. Nicknamed “the Cathedral”, the building’s 75-metre silhouette imposes itself along the Dunkirk coastline. For nearly forty years, liners, postal freighters, sailing ships, oil tankers and war ships saw the light of day there until the shipyards were definitively closed in 1988. Giving rhythm to the seasons, the launching of brand-new boats marked the imaginations of the people of Dunkirk for decades. That is why this vast space features the presence of a 30-tonne travelling crane, which allowed the voluminous pieces of prefabricated hulls to be rotated to facilitate the work of welding. Today, a modern version in perfect working condition is still used to transport heavy loads, especially exceptionally large works of art. It was even used as a work of art itself by the artist Delphine Reist who turned it away from its original use to make a luminous work entitled Scanner. The AP2 is one of the rare industrial buildings from the shipyards that is still standing and can host large-scale events.

Anne Lacaton
Born in Saint-Pardoux-la-Rivière, Dordogne, on 2 August 1955). Graduated from the École d’Architecture de Bordeaux in 1980; guest professor at the Harvard Graduate School of Design (Paris studio 2011), at the École Polytechnique Fédérale de Lausanne in 2003–04, 2006 and 2010–11, at the Oslo school of architecture in the winter of 2009, and at the Madrid school of architecture since 2007.

In 1988 they founded the practice Lacaton & Vassal, now located in Paris, and worked on housing and town-planning projects in France and abroad, including the Maison Latapie à Floirac in 1993, the Maison au Cap Ferret in 1998, the redevelopment of the Palais de Tokyo in 2001, the social housing of the Cité Manifeste in Mulhouse in 2005 and the École d’Architecture de Nantes in 2009. They won several prizes for their work, notably the Grand Prix National de l’Architecture in 2008, the main award in France, after having won the Grand Prix Jeune Talent in 1999 and the Grand Prix de la Jeune Architecture in 1991. In 2011 they won the Equerre d’Argent for the project renovating the Tour Bois-le-Prêtre in collaboration with the architect Frédéric Druot. They have also won international prizes: in 2018, the Global Award for Sustainable Architecture recognised their sustainable approach and valorisation of the built work, favouring adaptability by the inhabitants; the Daylight & Building Components Award from the Velux Foundation in Copenhagen in 2011; the Erich Schelling Award from Schelling Architecture Foundation in Karlsruhe in 2006, and the Innovation, Habitat and Sustainable Development Prize of the City of Madrid in 2006. In 2009 they were appointed International Fellows of the Royal Institute of British Architects. They were twice finalists for the Mies Van der Rohe Prize, the European award for contemporary architecture, in 2007 and 2003.